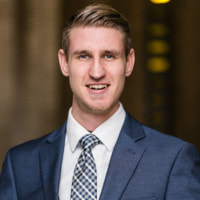 Matt Tilus
Director of Bands
Mr. Tilus joined the faculty in 2018 as the Director of Bands for Dewey Public Schools, where he directs the High School Marching and Concert Bands, the Intermediate Band, and the Beginning Band as well as teaching two classes of Music Appreciation.

In 2018, Mr. Tilus received his Bachelor of Music Education Degree from Oral Roberts University. While at ORU, he performed as a member of the university Wind Ensemble, Jazz Ensemble, Jazz Combos, and Saxophone Quartet. He was a three time selection to the Oklahoma Intercollegiate Honor Band, performing under distinguished clinicians such as Dr. Eugene Migliaro Corporon, and Dr. H. Robert Reynolds. Mr. Tilus was a 2013 selectee for the Missouri Ambassadors of Music, and a 2014 John Philip Sousa recipient. In the fall of 2017 Mr. Tilus taught in an internship role with Union Bands in Tulsa, working extensively with beginning woodwinds, brass, and percussion, 7th grade bands, 8th grade concert and symphonic bands, and high school concert and jazz bands. He also served on staff with the Bands of America Grand National finalist Renegade Regiment. Additionally, he has taught woodwinds, brass, and piano privately through Anthem Road Academy in Jenks and Bixby. Mr. Tilus is a passionate music educator with a desire to invest in the culture and community of his students, and he is thrilled to be a part of the Bulldogger family.

Mr. Green is a native Oklahoman. He was born and lived in Claremore for 34 years. Although the saxophone is his first love, he played saxophone and tuba through high school. He was selected for numerous honor bands playing tuba and was in the All-OMEA Jazz Band one year. Along with these honors, Mr. Green also was selected for numerous honor choirs and one of those being All-OMEA Honor Choir. After graduating high school from Claremore High School, he attended Northeastern State University where he received his degree in instrumental and vocal music education. At NSU he studied saxophone from the late Joe Davis and voice with Dr. Donald Studebaker. Mr. Green is currently working toward the Master of Music Education degree at Southeastern Oklahoma State University.
Mr. Green has been teaching for 16 years. He has taught at Liberty High School, Tulsa Public Schools, Justus-Tiawah Public School, and is currently teaching at Dewey High School. He resides in Bartlesville, OK, with his wife, Amber, and his two beautiful children, Cole and Jade.
Contact Mr. Green:
Email: kagreen@deweyk12.org
Phone: 918-534-2241 ext. 274